The Power of Passionate Storytelling 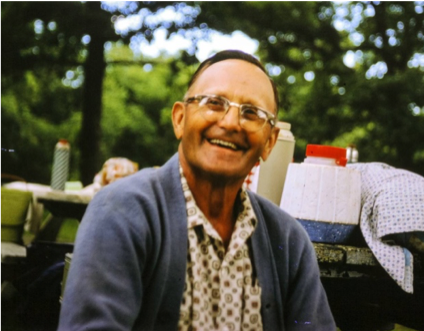 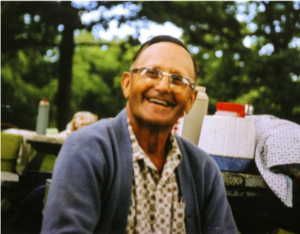 When I was a little girl, we would travel to my grandfather’s farm in Iowa for a visit. I always loved seeing Grandpa Fotsch. We would run into his strong arms and he would pick us up and squeeze us until our sides would hurt. Also, grandad was a wonderful storyteller.

He had a ratty mixed breed mutt named Buddy. This pooch was funny looking – scruffy haired, short-legged and stocky but full of heart. Grandpa would tell us that when Buddy was a puppy, he would see the yellow Labrador mix on the neighbor’s porch and run down the hill eager to play with him. Each time Buddy ran down the hill, instead of frolicking, he would get beat up and run home yelping with his tail between his legs. Undeterred, his mangy mongrel kept running down the hill to get “whooped”. This went on until Buddy learned to fight back. Even so, the young pup would come back trounced over and over.

In time, Grandpa’s mutt got stronger and more agile until finally, “The Day” came. Buddy spied his opponent coming out of his house and strutting on his porch. The smaller pooch flew down the hill intent on winning this bout. He fought his nemesis with speed and tenacity. In a matter of seconds, the larger, older dog relented and ran back to his porch. Buddy pranced back to Grandpa’s front steps; head held high in victory.

After this, like a soldier at his post, the warrior mutt remained ever watchful from his perch on Grandpa’s stoop. If that Lab even tried to move off his porch, Buddy would immediately dash down the hill and put him in his place.  After a while, fearing the smaller mongrel’s wrath, “old yeller” would not leave his porch.

Tenacity is in my DNA

Grandpa would end his story something like this, “Buddy is just like a Fotsch. You can put us down, pick on us for a time but then something happens in us and we come out swinging.  You don’t want to get us angry because you’ll find out, we mean business.”

Spellbound on hearing this story we asked Grandpa to repeat it over and over. In time, his message stuck- don’t back down from a fight, take on difficulty, you can overcome. Tenacity is in my DNA.

Only a few years later, I am at Cadet Basic Training, what we cadets referred to as “Beast Barracks”. I promise you those seven weeks lived up to that name.  We had to complete the torturous bayonet assault course or possibly be sent home.  Our opponents were rumored to be all members of the Army football team. When you are 5’2″ and 100 lbs. you get terrified having to go toe to toe with a football player!

I was literally shaking in my boots gripping my pugil stick as I waited my turn.  A pugil stick is a heavily padded pole-like training weapon used in training for rifle and bayonet combat. Clutching my pugil stick, I ran up the steep muddy ravine to meet my first opponent. I slashed at my antagonist with all my strength. He returned my blow with such force I was thrown on my back landing in a mud puddle. He screamed at me to come at him again. I got up and smashed at my rival’s pugil stick.  Again, he hit back with such force, I landed once more in that pool of goo. 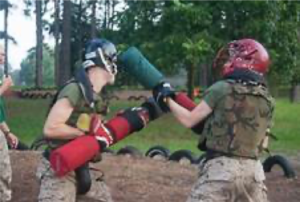 There on my back, I got mad, really angry.  It felt a lot like my older brother, Dave, picking on me. And something switched deep inside me.  Like a raging bull, I jumped to my feet and went after my nemesis slashing with gusto. My burly opponent was taken by surprise and relented.  Then he barked at me to continue to my next brawny adversary.  I never did well with each encounter, but I also never stopped fighting. And before I knew it, I finished the bayonet assault course. I was still alive with no broken bones. I roared inside!

When I reflect on the incident now, could it be that my grandfather’s story spurred me to overcome in my time of need?

I am convinced that storytelling is needed when communicating in our companies, communities and even in our families. Women, in particular, need tools to effectively connect with others to advance in their roles. Storytelling provides a means to connect emotionally with an audience and makes our messages sticky, i.e., memorable. Research suggests that stories are 22% more likely to be remembered than facts alone. Personal storytelling connects us emotionally with people.  It fosters trust as one demonstrates transparency and vulnerability. If you want to influence those around you must learn to tell a story and tell it well.

Recently, I had the privilege of speaking at the 10th Annual Integrating Women Leadership (IWL) conference in Indianapolis. This 1,500-attendee event offers a wide variety of quality break-out sessions. I titled my session: “Articulating Your Value through Passionate Storytelling.”

I began the workshop by telling a personal story about being a West Point woman. Using this story as an example, I instructed the participants to craft a story using Aristotle’s time-tested elements of an effective story.

According to Aristotle the key components of a good story include describing the setting or situation and characters in the tale. It involves developing the characters through the interplay and conflict between their differing personalities.  The next element is the inciting action – a conflict or obstacle that prompts the storyteller to take a series of actions that may have good and bad outcomes. The interaction of the characters creates the drama (tension and relief) in the story which keeps listeners engaged. The story reaches a climactic event that ultimately resolves the conflict.  The tale then ends with a transformation occurring within the storyteller.

After my brief tutorial, I gave participants time to craft a personal story. Next, they shared their story with a partner. After the storytelling, participants reflected on their experience with telling their story and most found the experience both liberating and empowering. Even painful stories when shared can heal and clarify one’s purpose and values. 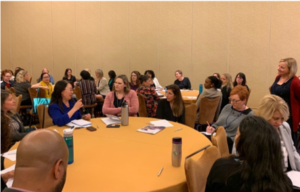 At the IWL Conference

What happened next was truly remarkable. I asked for a person to share their experience, a woman in the audience slowly raised her hand. Speaking with a heavy accent, she told us that she was an only child and adored by her parents. She admitted as a child she was even a little spoiled. One day, when she was in elementary school, her mother took her aside and told her that her father had cancer. The doctors had said that there was nothing they could do. The storyteller then recalled that she and her mother would go to the hospital and visit her father. As a young girl, she wanted nothing more than to have her father live long enough to see her graduate from elementary school.  However, her father’s health continued to deteriorate, and she knew her Dad’s time was running out. In desperation, she approached a nurse and pleaded with her to save her father. The nurse looked into her eyes and said, “There is nothing we can do.” And tragically, her Dad died.

Our storyteller said that from that moment on her ambition became to find a cure for cancer. Every day she gets up and goes to work for a large pharmaceutical company.  What gets her going is that she is constantly thinking of all the families that are waiting and hoping for a cure. She then said something like, “Every day I go to work thinking, we have to work harder and faster.  I think of all the families like mine, that are running out of time. We have to find a cure!”

When she finished speaking, there was not a dry eye in the room, the power of her story transported us. We were in her corner, silently cheering her on to never, ever stop working on her dream of eradicating cancer. The loss of her father to cancer became the basis for her life’s work. Her story was empowering not only for her but for everyone in the audience.

What if her boss, colleagues and employees heard her story?

After the session, I thought deeply about all that had transpired through her courageous story. I wondered if her boss knew her story. How might her boss be moved to assist her in this dream if he or she understood her passion?  Would her colleagues and employees be even more engaged in their work if she shared her story with them? Would purpose permeate her workplace if she courageously continued to share her story? I believe, it would. That is why we all must share our stories!

Tell Your Stories – Change Your World

I find it intriguing that the Latin root word for “authenticity” is “author”. Sharing our stories with passion clarifies our “raison d’être” – that is, our purpose. Being “authentic” goes beyond being honest about who you are, it’s about being your own “author”.  Authenticity then requires action and creativity. As we passionately share stories, we emboldened others to share their stories. As we hear other’s stories we evolve and become more interconnected.

Stories create emotional connections that make our messages memorable. Good stories tear down walls that often divide us. They build bridges so we build unity even as we respect our differences. I encourage you to tell your story and tell it well and share it passionately! When you do, you will change the world!