The Gift That Keeps Giving – December 2022 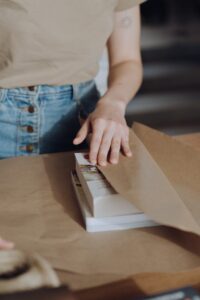 It began with a closing coaching call with Kyra Pagan, a mentee of a coach’s dream – open, humble, and eager to learn. As a coach for over 25 years, I have encountered some challenging clients. Some think negatively and complain, yet are unwilling to do the work of personal growth. How refreshing to work with someone willing to look deep inside, discover what makes her click, and begin to see herself in a positive and ever-evolving new light. When we began working together, I told Kyra, “Leaders are readers.” Over the course of many months, she devoured numerous books along with coaching and acquired new skills to use at work and even with her young children.  I knew my client was ready to leave the nest and fly alone. Desiring her to commit to personal growth for a lifetime, I created a list of 12 leadership books, one to read per month for 2023. I tailored the list to her specific needs and asked that she choose one of the books as my parting gift.

When creating a reading list for clients, I only recommend books I have read. For Kyra to get the most out of each book, I suggested she read with intent, highlight key concepts, write notes in the margins, and make a short book summary when completed. Store the outlines in a place she can easily access and re-read them when situations arise. When studied in this way, a great leadership read is the gift that keeps giving.

This is the time of year for gift-giving. I encourage you, my readers, to consider giving a leadership book to your loved ones and friends. As I began to compose this newsletter, a thought entered my mind: why not poll some of my successful friends who are all proven leaders in their respective fields? What leadership books would they recommend? I asked six friends, “What is your favorite, most transformational leadership book, and why?” Would we have similar picks with one another, or would they help me create a whole new list? And as friends go, their selections did not disappoint!

True to his Marine upbringing, Houston responded first to my inquiry.  His meteoric career began as a Marine Corps Officer flying the F/A-18 Fighter Jets. He then joined one of the largest airlines in the world, where he was quickly recognized for his ability to inspire others and get things done. Today he holds the heady role of Vice President of Flight Operations. One of Houston’s favorite leadership books is Ken Blanchard’s Gung Ho. In this quick read, the Marine writes, “the author uses three metaphors to describe how to build an organization that works together as a team with enthusiasm:

When a team embodies these three concepts, they become “Gung Ho” and unstoppable! Houston shared that those tenets are core to his leadership philosophy and may explain how even during the pandemic, his international Flight Operations were Gung Ho!

A long-time client and friend, Michele has worked for an IT staffing firm that, from the beginning, experienced rapid growth, including numerous acquisitions. As the company grew, she earned progressively more challenging roles and was recently named Chief HR Officer (CHRO) for ASGN Incorporated and Apex Systems. For several years, Michele was the sole woman on the Executive staff. Given her story, it made perfect sense that Michele selected Brave Not Perfect by Reshma Saujani as her most impactful book. Michele credits the Girls Who Code Founder with building her confidence to do things better as a leader. “Surround yourself with good people and then listen to others, then take that information and make a clear decision, which takes courage, because, Michele continues, “you could be wrong.” The best leaders take accountability for their mistakes, which is needed if you want your subordinates to follow your lead and own their errors. Reshma’s book helped Michele realize that she didn’t need to be perfect to be a good leader; instead, she needed to be brave, do the uncomfortable, and make the hard decisions instead of worrying about getting everything right all the time.

One cannot write about being brave without mentioning my friend, Vice Admiral Sandy Stosz, US Coast Guard, Retired. Sandy and I met as her epic memoir, Breaking Ice and Breaking Glass: Leading in Uncharted Waters, was published. A true pathfinder, she is not only one of the first women to graduate from the US Coast Guard (USCG) Academy, but the first woman to take command of an Icebreaker on the Great Lakes. Later, Sandy became the first woman Superintendent of the Coast Guard Academy. Despite her many accomplishments, Sandy is one of the most humble and relatable leaders I know. I was intrigued to learn that her favorite leadership read was a novel, The Caine Mutiny, by the Pulitzer Prize-winning author Herman Wouk. She explained, “I first read it when I was assigned as Executive Officer onboard a US Coast Guard Cutter. We had a Captain who displayed habits akin to those of the infamous Captain Queeg.” If you know the story, Queeg represents the worst combination of a wartime leader, both incompetent and cowardly.

Sandy continued, “Reading that book was good therapy for me as I realized there were others who had endured the same challenges serving at sea. It’s a superb leadership book in that it helps a reader learn what kind of leader he/she did NOT want to be!” The Admiral adds, “Reflecting back on my career; I learned more from the bad or not-so-good leaders I served than from the superb leaders. That’s because I learned the bad/not-so-good very viscerally, the kind of leadership I’d never inflict on others. I think I took the good leaders for granted, to some extent, but I never forgot the adverse impact of the bad ones and swore to never become like them.” As with the poor to mediocre leaders we have all endured, they can teach invaluable lessons and what actions and attitudes to NOT emulate.

Like Sandy, my friend Venus chose a career that, at the time, few women selected. Venus grew up in the IT world and earned an MBA and PMP. She has over 20 years of experience in the healthcare industry running multi-million-dollar projects and programs. Today, Venus is a Data Analytics Product Owner for a large insurance company. She has dealt with her fair share of challenging bosses and project teams while meeting exacting project deadlines. For Venus, Fail Fast, Fail Often, by Ryan Babineaux and John Krumboltz, was her most cherished book. From the pages of this book, she learned not to be afraid to take risks and develop a proper perspective on failure: “take the learnings and move one” and “strive for progress over perfection.” Those lessons have proven to be Venus’s means of navigating the choppy waters of IT.

My West Point classmate, Ray, encouraged me to strive for progress by not quitting. As I detail in my book, we were on a brutal run during basic training (we commonly called Beast). Ray told me not to drop out and hang on a bit more (which I did!). I had no idea, at the time, that this helpful classmate would become a Major General. After West Point, Ray spent 37 years in the US Army as an Infantry officer with combat experience serving in both active and reserve units. Before retiring, he served as the Deputy Chief of Staff US Army Training and Doctrine Command (TRADOC), Fort Eustis, Virginia. A fascinating tidbit about my classmate is that Ray represents the third generation from his family to have served with the 1st Infantry Division in foreign campaigns during times of conflict – World War II, Vietnam, and Iraq. Perhaps owing to that tie to military history, he penned, “I find much inspiration from the person of Brigadier General Theodore (Ted) Roosevelt, Jr. (President Teddy Roosevelt’s son) – as told in the book, In the Rough Rider’s Shadow by H. Paul Jeffers. As a member of the 4th Infantry Division at Utah Beach, Ted was “…the only general to hit the beach with the first wave of troops on June 6, 1944.” Ray describes the scene, “He was armed with his cane and pistol – seen walking the beach – leading and encouraging soldiers – under fire – without any care for his own life.” The Rough Rider’s son died several weeks later from a heart attack. From the book, Ray quotes, “…that at the moment of Brig. Gen. Ted Roosevelt’s death, there was on Ike’s (President Eisenhower’s) desk a set of orders dated July 14, 1944, naming Ted commander of the 90th Division, US Army, and recommending promotion to the rank of Major General.” Ted Roosevelt, Jr. may have missed his next star, yet his unforgettable leadership lives on.

My friend, John, began what might have been a similar path to Ray, choosing to attend and graduate from The Citadel. However, he became an aviator and eventually joined a major airline. There John excelled as a management pilot earning the reputation of successfully leading multiple highly complex initiatives simultaneously. His keen ability to effectively inspire and work through others earned him the role of Director of Flight Operations. John needed to expand his list of favorite leadership books to more than just one. He listed three books:

When asked to elaborate on his choices, John wrote, “I believe all recorded history has demonstrated that servant leadership creates a culture of trust and commitment to a cause. When people understand not just what the goals are but why and capture the vision and buy into it, then all that’s left is execution.” Having read all three books and seen John in action, I can tell you John lives and breathes servant leadership. He articulates a clear vision for the future and holds himself and others totally responsible for results.

This brief poll of my friends did not disappoint. Their choices included a leadership classic, more recent publications, a novel, a history book, and the Bible.  I now have several new books added to my reading list for 2023. I also have new ideas for gifts for my friends.

As acclaimed author and speaker Jim Rohn said so well:

“If you want to live a top shelf life, then you need to stand on the books you have read.

I would love to hear from my readers; what is your favorite leadership book and why? Which of the books mentioned in this article would you like to read next? What book do you need to wrap with a bow for that colleague or family member? Leave me a comment or two because to continue to learn and grow, I constantly add titles to my book list.

And remember, during this holiday season, give the gift of a leadership book, the gift that keeps giving!