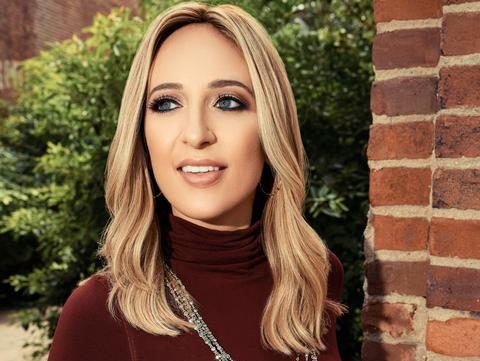 Don’t we admire those who persevere and overcome the odds? Don’t we long to hear stories of those who survived overwhelming difficulties and loss? I have always been intrigued by the resilient, and especially resilient women who have persevered. Desiring to learn more about resilience, I devote myself to reading all I can on the subject.

Not long ago I was introduced to a true survivor, Bonnie St. John. Bonnie was born with one leg that would not grow, so at the age of 5, the 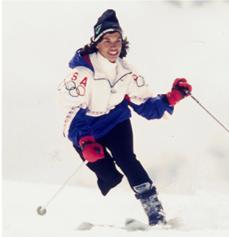 doctors amputated that leg. What may have kept many of us from moving forward in life and even competing in sports, never stopped Bonnie. As a teenager, she was introduced to skiing. Despite having a prosthetic leg, she learned quickly and became a competitive skier. In 1984, Bonnie became the first African American ever to win medals in a Winter Olympic competition, taking home a silver and two bronze medals at the Winter Paralympics in Innsbruck, Austria. She was also a gifted and hardworking student earning degrees at both Harvard and Oxford. She served as an Economist under the Clinton Administration before devoting herself to her writing and speaking

career. Her brilliant book, Micro-Resilience poses that resilience is typically described as the ability to bounce back after a defeat. The resilience Bonnie teaches is the ability to become something better and stronger. Like the formation of a diamond that begins as a rock, when exposed to extreme pressure and temperature for long periods of time, emerges quite differently than its original state – something of beauty.

Is it then by sheer coincidence that I met some true diamonds – some 40 women survivors of the Holocaust at an international jewelers’ studio in Brooklyn?

In December 2019, I was invited to a Women of Strength luncheon at Freida Rothman’s Design studio. Much of her inspiration for her exquisite line of jewelry (www.freidarothman.com) comes from her grandparents. Freida credits them with teaching her to see the beauty wherever she finds herself. Her grandparents knew this all too well, all four of whom survived the horrors of the Holocaust and went on to rebuild their lives in America. In a desire to ensure that no one forgets the atrocities committed and those who suffered and survived, Freida arranged this gathering to give homage to these women survivors of the Holocaust.

Her studio is located in industrialized Brooklyn with a view of both the Statue of Liberty and a federal prison. It was cold and rainy when my 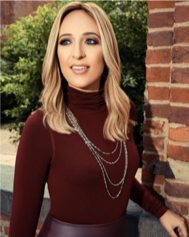 daughter, Joye and I arrived. The stark conditions outside contrasted with the light and airy room filled with the sweet aromas of the catered and kosher lunch. There to show their support were young Orthodox Jewish women dressed in designer clothes and handbags and long wigs. One could palpably feel the anticipation in the room build as the women who had lived through so much evil and loss began to arrive. Ranging in age from their 80s to over 100 years, the ladies hobbled in one by one, wearing fur coats, scarves, elegant pearls, and broaches. Many leaned on canes, walkers or on a caregiver as they looked for a friend and open seat. I noticed that even while moving slowly these women walked with dignity and purpose. Once seated, the ladies began to share stories and at times teared up. Sometimes they were unable to finish sharing a tale and merely stared off seemingly lost in the pain of that memory.

One woman, I sat near said, “My arms don’t work.” She then explained how she was forced at a young age to dig graves for the bodies of gas chambers victims. Afterword, her arms never fully recovered. I introduced her to my 22-year-old daughter, Joye, whom she smiled at warmly. My new friend added that Dr. Mengele, also known as the Angel of Death, performed brutal experiments on her. Woefully, she said something like, “Because of Mengele, I was never been able to have children.” I told her how sad that made me. Next, she painfully reached out her hand and touched my face and looked into my eyes and said, “Oh, you are so young! So much life in front of you – live good lives.” There really was no other answer, so I told her I would endeavor to live a worthy life. 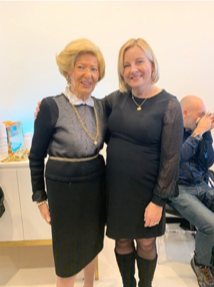 I also met the slender and elegant lady, Dolly Rabinowitz. Dolly is 92 years young and rarely sat down during the 5-hour luncheon. She patiently fielded questions from the New York Post, and local TV news interviewers. In her quiet demeanor, she patiently answered their questions revealing different parts of her story. Doree Lewak, of the New York Post, described in her article, “Holocaust survivors recall Nazi ‘death march,’ streets ‘full of bodies’”, relating some of Dolly’s story. I retell some of the highlights:
Born in Berehove (then Czechoslovakia, now Ukraine), Dolly’s father was a businessman. When she was 13 years old, her entire family was rounded up along with other Jews from nearby villages and forced into a large brick factory. There they were held for two days before they were taken to the railroad station and forced like cattle, 100- 120 of them in a railway car and transported to concentration camps. The conditions in those cars were horrendous. Dolly witnessed a baby being born and a man dying.
Dolly and her older sister, Suzi became separated from the rest family. They were brought to Auschwitz. Dolly remembers constantly fighting hunger during their internment. She once sneaked out of the barracks desperate to fill her belly. She was rummaging through kitchen garbage when she was spotted by a Nazi soldier. She was beaten and left out in the yard unconscious. When she regained consciousness, she crawled her way back to her barracks. Life was hell in Auschwitz, yet Dolly and Suzi survived the camp for nearly 5 years.

Then in mid-January 1945, as the Soviet Army advanced, the German soldiers marched nearly 60,000 Auschwitz prisoners almost 40 miles in the sub-zero cold to other camps. Those who didn’t freeze to death died of starvation, while those who couldn’t keep up were executed. In all, 15,000 people died.
Dolly recalled, “We were in a cotton dress, wooden clogs and marching day and night. Anyone who was tired and wanted to sit and rest 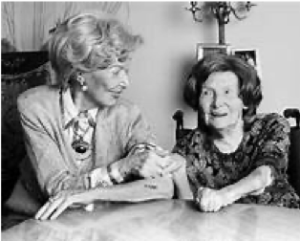 were shot immediately … The gutters were full of young bodies.” At one point, Dolly was exhausted. She begged Suzi to let her sit, down and rest. “She knew if I did, I’d be shot,” she says. “She pulled me under the arms, held me up and carried me until we came to Ravensbrück,” another death camp.
Eventually, Dolly and her sister were liberated and found their way to New York. Dolly ever mindful that she owes her life to sister, now cares for Suzi (Schwartz) who is now 102. Here are the sisters showing their prisoner numbers. 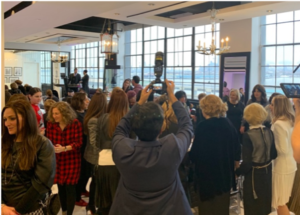 Throughout the luncheon, Shulem Lemmer, a Hasidic Jew, and accomplished singer serenaded and inspired us with Hebrew songs and some contemporary songs from his recent album. The end of the luncheon moved me to tears. Shulem began to sing a traditional Jewish folksong. That’s when these women once again showed their incredible resilience. One by one nearly all these frail women rose from their seats formed a large circle and began to dance. Soon the younger women joined in. I was mesmerized. After all, these Holocaust survivors had endured, and all they had lost, they chose to stand and celebrate life. It was not long at all and I made my way to the circle and they opened their arms. As we stepped to the left and lifted our arms in unison with the music, I felt a deep connection and solidarity with these women. Women who had endured unspeakable evil and suffering sang and danced for nearly 45 minutes! They were more than their history, and like Bonnie St John, they were not damaged goods. No, I thought, they are much more, they are beautiful diamonds!