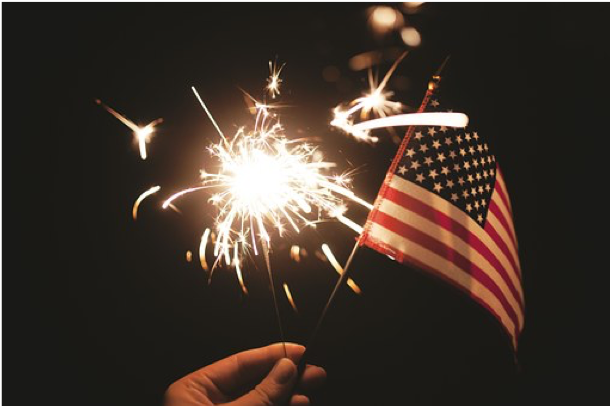 The celebration of our country’s independence is a time of coming together, commemorating our unique democracy and embracing all the freedoms the Declaration of Independence stipulates. Like most of you, I have attended many 4th of July celebrations filled with great food, patriotic music and captivating fireworks. Each year, I come away from the festivities with a renewed love for my country and my fellow Americans.

I also recall my first Independence Day as a New Cadet at West Point. The three days of Cadet Basic Training (Beast Barracks) I had survived felt more like three months in some warped reality. In the sweltering heat of the summer of 1979, our cadre marched 1,200 of us out to Trophy Point for a ceremony and concert. We wore our white shirts and gray pants absent of any rank. At the time, I was inconsolable, homesick and demoralized. I had been berated numerous times that day by upper classmen and could not see myself making it through. As I sat, I questioned whether I had made a mistake choosing to attend an elite service academy.

I gazed out across the expansive Hudson River and began to plot my escape. As dusk set in, I could easily slip out undetected, run down the hill to the shoreline and plunge into the deep waters. Would I be able to swim that far, I wondered? Even if I made it across, how would I get home to Massachusetts? How might I explain my decision to my parents? Would I not be dependent on them? Did I want that? What about the oath of allegiance to my country I had repeated on Reception Day? Did I mean what I said?

The thoughts came and went as I tuned into the familiar melodies of the concert music. As the music filled the air and began to build in crescendo, my dream of escaping disappeared like the vestiges of the waning daylight. I knew I needed to stay the course and do the right thing. I decided to lean into my fear and trepidation of what it would take to survive Beast Barracks. I would endure for that evening and then the next day and the next and so on. In the months and years that followed, I questioned my decision to stay at the academy many times. In time, I adjusted to the all-encompassing demands of the institution as it prepared me to serve my country. In time, I could count my successes more than my failings. I learned to thrive at West Point. By choosing to do the next right thing, on that 4th of July so many years ago, I began to “own” my own independence.

Since writing my book, I met two incredibly accomplished young women. Julia and Rachel are just days away from reporting to their own Cadet Basic Training with the West Point Class of 2023. Soon they will be tested emotionally, physically and academically beyond what they may believe they are capable of doing. When they celebrate July 4, 2019 as New Cadets, they may be questioning that decision. In honor of Julia and Rachel, I chose this excerpt from my book. I want to remind these brave young women that both freedom and independence come when we choose to just do the next right thing!

DO THE RIGHT THING

Having an Honor Code at West Point allowed cadets a good deal of freedom. We did not have locks on the doors of our rooms. We did not need to worry about anything being stolen from our rooms. We learned to trust one another, which was foundational to building camaraderie and esprit de corps.

Our training as Fourth Classmen demanded personal responsibility. Initially, we were held responsible for our uniforms, our rooms and our weapons. And as I have previously detailed, the Academy imposed
Fourth Class duties such as delivering Upperclassmen’s mail and laundry. We also called minutes, standing at attention and shouting for our leaders’ benefit, the proper military dress for the upcoming parade or an event such as dinner formation. At the time, I often felt those duties were unnecessary ways to possibly screw up and get in trouble. At times they felt demeaning, yet they were all part of the system to teach us personal responsibility with integrity.

We learned to do the work assigned no matter how trivial and to complete it wholeheartedly. We were learning conscientiousness, dependability and a work ethic. In time we learned, as The Cadet Prayer
states: “To do the harder right, instead of the easier wrong.” We could be counted on to do the right thing.
Somewhere between the learning and the doing, the message of “my word is my bond,” became a part of my being as a cadet.

Later, when serving in the Army, a fellow graduate, Lieutenant “Gray,” was confronted with an ethical dilemma when submitting a vehicle readiness report. The Operations Officer for the Battalion wanted him to change the report to reflect a higher readiness than reality. LT Gray was appalled that someone would suggest changing a report. He then stated that he was unwilling to change the report despite being unsure about how that decision would impact his Army career. At that moment, he decided to “do the right thing” even if it cost him.

The interesting thing was, once LT Gray stated clearly that he would not back down, the Operations Officer changed his tune and no longer pressed him to change the report. Although this episode was disheartening for this young Officer, LT Gray was satisfied that he had not compromised his ethics.

Sometimes, despite our best efforts, some in leadership will work against what may be best in a situation such as providing senior leadership inaccurate equipment readiness reports. LT Gray though chose to do the right thing.

As a leader in the Army, I believed in being candid and forthcoming with my soldiers. In return, I believe that I built trust with my subordinates. If I told a soldier I was going to look into a pay, leave or promotion issue, I meant what I said, and I acted upon it. However, I also learned that I could not blindly accept what was sometimes communicated to me. For example, a mechanic completed a job order and reported the repair complete, yet when the customer picked up the item and found there was still an issue, that soldier and his leadership had to explain themselves to me. The next time that mechanic claimed to have completed a job, I would verify that his leadership had signed off on the work signifying the repairs were fully complete. I had to learn to trust but verify.

Several years into my corporate career, I was employed by a large company as an internal consultant. I enjoyed my role immensely. However, I learned that several positions in my department would be
eliminated. We were told to continue working hard in our jobs while leadership decided who would stay and who would go. Of course, the uncertainty of not knowing whether or not your job would remain
created angst and some questionable activities in our department. Co-workers began bad-mouthing others in the hopes their roles would be preserved. Others maneuvered behind the scenes to insure they had
a back-up job in another department. I decided to just continue to do my job as well as I knew how.

As part of my consulting role, I met with a Senior Vice President for a follow-up coaching session. We worked on his development for about 45 minutes. He gained a great deal of insight and wanted to continue the work, asking to schedule our next meeting. I told him I would like to do that but was uncertain about whether we could meet again as my position was in question. Being in another department, he was unaware of the downsizing. He leaned forward in his chair and commented, “And
here you are giving me all this beneficial coaching while you do not even now if you will have a job next week!” He went on to say, “I am not sure I could do that if I was in your position.” In all honestly, I did not enjoy living in a form of purgatory during those weeks of uncertainty, yet as a West Pointer, I was determined to do the “harder right.”

There may be times when you feel pressured to shield the truth, doctor a report, or try to renege on a contract. In the end, we pay for those breeches. I believe it erodes our self-respect and inhibits our ability to build trusting relationships with others. Our influence is diminished and in time we may be found out. We need only look at the daily news to see the consequences for failing to do the right thing. That is why
I encourage you to embrace integrity and candor. Both are needed when playing the long game of life.