May 26, 1983 is the day that I married James Edwin Gaba, Jr. But all who knew him called him, Eddie.  He was my West Point classmate and first love.  Many of you know my story of how I lost my first husband at the tender age of 36.  And today, May 26, 2019, would have marked our 36th wedding anniversary.

For many years I was unable to speak publicly about his loss without breaking into tears.  And his death was indeed catastrophic for me and our daughters, Larisa, Gwenyth and Joye.  Over time, I would tell a bit more sometimes to friends and sometimes when afforded an opportunity to speak. However, today so many years later, I felt compelled to share one of the last memories I have of the good man who took me as his bride.

In 1997, we lived in Richmond, Virginia and decided to take one last trip to the beach for the summer.  School was to begin soon for our older daughters, and we wanted them to enjoy one more time in the sand, frolicking in the waves, creating castles and capturing sand crabs.

I sat on the beach with our miniature Schnauzer, Buddy, while Larisa who had just turned 9 and Gwenyth at 71/2 years of age would jump the waves with their Dad. He would hold each of their hands as the whitecaps would hit them knocking them from their feet.  Sometimes they vied for independence and would try to ride the waves by themselves. Their Dad though would stand close by and pull them close, out of the undertow, whenever he sensed danger.

Later that afternoon, a fellow beach goer offered his small inflatable raft and paddles to Eddie and the girls. He said he no longer needed it as he returned home to New York. We thanked him and then Eddie, Larisa and Gwenyth got aboard the raft and paddled out in the water beyond the break where the waters were less turbulent.  Then after laying on the raft in the sun for a while, Eddie would turn the boat toward shore, and they would allow the tide to propel them safely to the beach. They did this over and over, half-screaming, half-giggling as the tiny raft mounted and descended the crescendo of waves.

Being 8 months pregnant, I sat on a blanket on the beach content to watch them for some time. Then, I would turn my eyes back to the book I had brought to read.

As the sun began to set, we piled the towels, sand buckets, the deflated boat, paddles, ice chest, kids and dog into our van for the 2-hour drive back home. When we got on the road, we discovered that for some reason our car radio would not work.  We would be traveling with no entertainment.  With no noise but the sound of the car, the two exhausted girls were soon asleep along with the schnauzer in the back seat.

I wanted to finish the book I had been reading and so I pulled it out and began to read as Eddie drove home.  He looked over and noted the title of the book and asked, “Haven’t you read that book like three times?” I smiled and thought, “A good book never gets old!”  But this book was different, I was reading from “The Chronicles of Narnia”, the C.S. Lewis classical fantasy series. I was almost finished with the final book of the series entitled, “The Last Battle”.

C.S. Lewis had been an incredible influence on my faith. Introduced to this brilliant author through my spiritual mentor at West Point, I devoured several of his books when I probably should have been studying. This atheist turned Christian apologist helped me overcome some of the intellectual struggles I had with my faith.  Eddie knew how “Mere Christianity” and “The Screw Tape Letters” had been monumental in my decision to follow Christ wholeheartedly. Even so, my husband was puzzled as to why I loved his children stories so well.

In part, my children were young, and I had been in the habit of reading children’s books for several years.  But in a more profound way, the truths that Lewis related through the imaginary land called Narnia were nonetheless deeply theological.

After giving my husband’s question some thought, I replied, “I love these stories because they can be read on so many levels.”

And it is not just children who become enchanted with the four Pevensie children, Lucy, Edmund, Susan and Peter and their discovery of a magical wardrobe that leads them into a land filled with talking animals and mythical creatures like the gentle, Mr. Tumnus, the faun (half man/half goat). To this day, when I see a beaver dam, I imagine Mr. and Mrs. Beaver making fish and chips in their home in front a nice fire.

On another level, the Chronicles are a wonderful allegory of the Christian faith. Aslan, the Lion represents Christ who dies for Edmund, who is a traitor. Aslan overcomes death and leads the Narnian Army to end the rule of the Witch. This is not unlike what will happen to Satan when Jesus returns.

The four children as they mature, come to understand that Aslan will at times appear to leave them.  And in the series, he often departs after a major battle or difficulty.  As one would expect, the children feel a deep aching or longing, whenever the beloved Lion leaves.

One kind Narnian shares with Lucy after one such departure, “He’ll be coming and going” he had said. “One day you’ll see him and another you won’t. He doesn’t like being tied down–and of course he has other countries to attend to. It’s quite all right. He’ll often drop in. Only you mustn’t press him. He’s wild, you know. Not like a tame lion.” (The Lion the Witch and the Wardrobe).

For those of us who pursue a relationship with God, we must never seek to put our Lord in a box. He is omnipresent and omniscient. And He is also mysterious. “My thoughts are nothing like your thoughts,” says the LORD. “And my ways are far beyond anything you could imagine.” (Isaiah 55:8, NLT).  And just because we do not understand His ways, does not mean that He is not loving and is not with us. One of his names is Emanuel meaning “God with us”.  And I was soon to learn this truth on a much deeper level.

On the drive home, Eddie and I spoke about all the symbolism and meanings behind the Narnian tales. Then he asked me to read from the last chapter of the “The Final Battle”.  Here the four Pevensies children find that they are suddenly in Aslan’s country speaking once more with their beloved Lion.

“And then Aslan turned to them and said, “You do not look so happy as I meant you to be.” “There was a real railway accident,” said Aslan softly. “Your father and mother and all of you are – as you used to call it in the Shadowlands – dead.  The term is over: the holidays have begun. The dream is ended: this is the morning.” And as He spoke, He no longer looked to them like a lion: but the things that began to happen after that were so great and beautiful that I cannot write them. And for us this is the end of all the stories, and we can most truly say that they all lived happily ever after. But for them it was only the beginning of the real story.  All their life in this world and all their adventures in Narnia had only been the cover and the title page: now at last they were beginning Chapter One of the Great Story which no one on earth has read: which goes on forever: in which every chapter is better than the one before.”  (The Final Battle)

When I finished reading the book, my husband turned to me and smiled and said, “Now, I know why you love these books and want to keep re-reading them.” I returned his smile and we drove on enjoying the quiet and peace of being closest to those we loved most.

What I did not know that in a mere week’s time I would be widowed and confronted with my most difficult of leadership challenges; learning to live and lead our family without my husband, best friend and partner.  In those painful weeks and years, when my broken heart would not heal, and I often felt alone and without comfort.  I knew that God was not silent, He was with me through every valley, and up every hill and even as I climbed up to the top of every mountain.  Emanuel was there even when I could not feel His presence. And He was there in the still quiet voice that calmed my fears as I lay in bed overwhelmed and feeling inadequate.

He sent me good and kind people. They were not talking beavers or fauns. They were people like my mortgage banker who took my daughter to counseling when I could not, and also invited my family to our first Thanksgiving without Eddie and treated us to Virginia “spoon-bread”.  It was the Small Group leader who spent hours of time encouraging me, when I was at my wits end with my teenage daughters. It was the bear of a man who prepared me for my first interview with such patience.  And it was a young widow I had befriended who later when I was unemployed, connected me with a company where I eventually was hired.  Eventually He sent another wonderful man who would come and marry me and also love my girls.

I knew from the moment that I was told that Eddie was gone that he indeed was very much alive. Eddie was playing his role in the “Great Story” where the “colors were deeper and more wonderful” and “every rock, flower and blade of grass looked like it meant more” (The Final Battle). He was home!

And so, we wait patiently when we too will see our beloved again and so much, much more….. 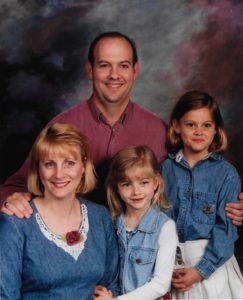