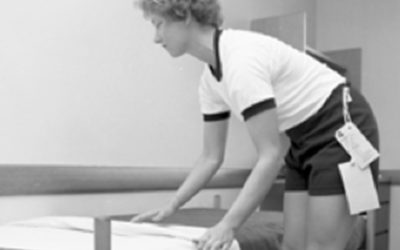 Just this week I was interviewed on a podcast by my classmate, Laurel McHargue. Laurel is not only an award-winning author having published 8 books, she also hosts the highly successful podcast, Alligator Preserves (to listen in to our conversation, I have posted the interview on my website).

As a seasoned interviewer, Laurel has this uncanny ability to make her guests feel welcome and completely relaxed. And although, we did not know each other very well at the Academy, we quickly discovered how similar our experiences were. In short order, we each recounted several of stories of our common West Point experience. Before much time had expired, we were both laughing as we reminisced. Near the end of the interview, I realized I was smiling, and my mood was exuberant. Isn’t that how it is when we are granted the freedom to be real with someone and belly laugh with abandon? Humor is equally important in your life and it was definitely essential to survival as one of the first women at West Point. And this is why I dedicated a chapter in my book to the subject of humor. Join me as I tell some of the hilarious stories from behind the gray walls of the Academy….

Although we often complained, cadets developed a quick wit and a sense of humor to offset the repressive reality of our daily grind. There were many opportunities to be put in compromising positions as women. Further, there were ample opportunities to mess-up as a Fourth Classman. As we relived those experiences with each other, we would laugh, and our burdens seemed less dark. Our existence felt a lot less dire, rather rich and in some cases very entertaining.

The lesson of learning to laugh and find the humorous in daily life has kept me sane and not just at West Point but throughout my life.

SAMI
Saturday Morning Inspection (or SAMI) as the name implies, was held on Saturday mornings. Upperclassmen would inspect our rooms for everything from how tight our beds were made to how exceptionally clean our room appeared. They would check our wardrobes and drawers to ensure complete compliance with regulations. Every sock was folded to create a ‘smile,’ and every item of underwear was folded as required and then arranged in the drawer in the specified manner.

My two Beast roommates, Catherine O’Connor and Tracy Brown Curley and I worked diligently the night before the inspection. We dusted every crevice, polished every shoe and inspected every drawer – all with the hope that our room would be found acceptable. If so, then we could make our way through the Upperclassmen and their harrowing demands of recitation of Plebe poop to then stand in line to be able to make a 15-minute call home. We had been warned that the cadre was merciless and no matter how perfect the room, they would find something wrong. Or simply because they were in the position to do so, they could tear up our beds, throw out all our carefully folded clothes and suspend all our hopes of phoning home. 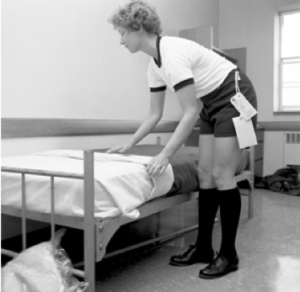 As we began to arrange our room, I had a non-descript box of feminine pads and tampons. But there were no regulations describing where this item should be properly located for an inspection. Not knowing what else to do, I moved it to the back of one of the drawers and hoped the inspectors would not see it. When the First Sergeant and Squad leader entered our room, they performed as we expected, tearing up our beds and finding fault. While inspecting the mirror, the Sergeant sadistically smeared petroleum jelly on the mirror. Then acting disgusted, he ranted, “What is Vaseline doing here?” We knew we were powerless to challenge this incident and our hopes of getting to call home were dwindling.

Next, the Sergeant began looking through our wardrobe and drawers. He then opened the drawer containing my box of “monthly supplies.” Believing it was some type of contraband, he turned to me and asked, “What is this? Trying to sneak something in here?” And then, he opened the lid and his face turned red. He quickly put the box down, yelled for us to clean up the room and quickly left. Once they were gone, my roommates and I began to laugh and laugh. So, I kept the box for all future inspections. It became our secret weapon.

Even when my roommates and I believed we were at the mercy of our intimating male cadre, they themselves were at a loss at times to know how to lead and manage women. Perhaps we were teaching them they would need to learn new skills other than intimidation and condescension. And isn’t it ironic that even today, men often struggle with how to manage women in the workplace.

DINNER FORMATION
When the academic year began, Plebes were assigned to one of 36 Companies. I and two women classmates, Pam Abear and Jenny Campbell were assigned to H-2 (Company H, Second Regiment). One of our Plebe duties was to call minutes prior to each formation, be it a meal or parade. Minutes began at five minutes prior, two minutes and then one minute prior to the assemblage. The assigned Plebe would stand below the clock, and at the exact time “sound off” something like the following: “Sir, there are five minutes before dinner formation. The uniform is white over gray with sabers.” This communique informed the cadets on that floor that they would don their white dress shirts and gray pants. Seniors would also add their sabers. Other uniform options could be Dress Gray, Parade Dress, etc.

Between the five-minute and two-minute call, the Plebe would stand at attention. He or she was then a target for Upperclassmen to ask any variety of question. What’s the dinner menu? Pop off the days! (That is, begin a recitation of how many days until the Army-Navy game, Winter Break, Spring Break, Graduation, etc.)

My roommate, Pam, was from New Hampshire and had a thick New England accent. When she called the minutes, it sounded like this: “Sa, thewe awe five minutes until dinnah fowmation. The unifowm is White over Gway with Sabahs.” Immediately, several Upperclassmen charged from their rooms and surrounded her. One, pointed to his saber. Yelling, he demanded, “Abear, what is this called?” To which she would quickly reply. “Sah, it’s called Sabah.”

This so entertained the cadre that it led to requests for her recite the minutes again and again. Back in the room, we all laughed hysterically. Pam being a proud New Englander didn’t allow the added “attention” to make her change her accent. She was demonstrating self-confidence, a skill she would need both at West Point and later as an Army Officer.

OMAR – OH MY!
On R-Day (Reception Day), at the beginning of Cadet Basic Training, more than 1,000 of my classmates and I were marched into a large hall and measured for our numerous uniforms. The measuring was done quickly so that the tailors could get to work, and the legion of new cadets could wear a uniform in the parade for our parents later in the day. We were told that some of those tailors came from New York City to help with this herculean effort. Obviously, there was no time to make fine adjustments to those uniforms. In fact, when a cadet might question a fit, he or she might be told, “Ita fita fine.”

One pair of my dress pants never seemed to fit quite correctly. Once, later in the academic year, I noticed those pants came back from the cleaners and the zipper was a bit bent. We had a parade that day, and as these were the only pants, I had that were clean, I quickly put them on and added all my additional parade attire.

This parade was honoring Omar Bradley, the famed World War II General. He was dubbed by journalist Ernie Pyle “the GI General” for his unassuming manner and frequent donning of a common soldier’s uniform in combat. General Bradley, a USMA Class of 1915 alum, eventually was named the Chairman of the Joint Chiefs of Staff in 1948 and, with that, earning his fifth star. In 1980, however, he was 87 years old and confined to a wheelchair.

As is the protocol for honoring dignitaries, like General Bradley, the Corps would conduct a “Pass in Review” while in Full Dress uniform Beginning with First Regiment through Fourth Regiment, each of the Corps’ 36 Companies would execute “Eyes Right” as we passed the individual. As we marched near the dignitary, the Company Commander would shout, “Eyes” and immediately his platoon leaders would echo the command. Next, the Commander would yell, “Right!” and the entire unit would simultaneously snap their heads to the right toward the honoree. Then after marching past the dignitaries, the Commander would then command, “Ready!” and the platoon leaders would echo, “Ready.” The Commander would bellow, “Front!” and we would snap our heads forward in unison.

All parades are stressful for Fourth Classmen. It starts from the time before the parade begins when indiscretions found in our uniforms would give opportunity for hazing and questioning. Then, once we began to march, we were barraged with correction. “Dress right, Beanhead!” This means that you were not staying in line with the person to your right. Hence, we were under constant fear that we would screw up and be singled out. If not during the parade, we could even be disparaged for our failures when we were under the “Sally Ports” away from the view of the parade attendees.

As my company approached Omar, and the Company Commander shouted “Eyes Right, “and I snapped my head. I felt a sudden gush of air entering my pants and realized that my zipper had unzipped. I was mortified! Fearing the Upperclassmen around me, I could not (in the middle of a parade) stop to zip my pants without bringing down the forces of hell upon me. I marched on with the air ripping through my loins until we were back in our assembly area of the barracks. Before we could be dismissed, our Squad leader walked down the Squad and checked us out, giving us feedback on our marching or just holding us there as long as he chose. When he came to me, he looked down. Noting the gaping hole and holding back a laugh, he said, “Cadet Fotsch, do you have something to say?” Beyond embarrassed, I asked to make a statement and said, “Sir, may I make an adjustment?” He nodded, and I whipped my hand out and zipped up those damn pants!

In not trying to zip my pants during the parade, I potentially had avoided making the company look bad. While reaching for my zipper, I might have moved out of line with those to my right or, worse, I may have tripped, and my rifle might have slipped off my shoulder. Although my Squad leader did not make note of my restraint, I was in fact demonstrating esprit de corps! Even when making mistakes, we can still demonstrate leadership.

As Mark Twain is credited with saying, “Humor is tragedy plus time.” At the time, the “Omar, Oh My!” not to mention the other embarrassing events recounted in my memoir were devastating to my self-esteem. Embarrassment is inevitable. Laughing, however, is a choice. Humor in all its forms is good for the heart.

Embracing humor is the antidote we all can choose as we face embarrassing or trying times. It is healthy to laugh and reminisce about the ridiculous situations we have all lived. As for me, when I say, “Omar, Oh My,” I always grin.